Other Key findings include:​

Programs were able to reach and serve youth facing a wide range of challenges, without substantial effort beyond their normal outreach strategies, suggesting that programs were already serving many youth with significant risk factors.

Youth with differing risk profiles (that is, levels and types of risk) had mentoring relationships of similar strength and duration and derived similar benefits from program participation.

The study’s findings also point to gains in social acceptance, academic attitudes and grades. Youth did not appear to benefit in their relationships with parents or behavior toward peers or to show reduced misconduct.

In addition to benefits in specific domains, mentored youth also experienced gains in a greater number of outcomes than youth in the comparison group. 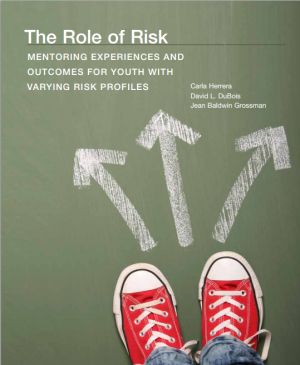 A Public/Private Ventures project funded by the Bill & Melinda Gates Foundation involved more than 1,300 youth, drawn from five Big Brothers Big Sisters programmes and two other mentoring programmes serving young people in Washington State. The study, "The Role of Risk: Mentoring Experiences and Outcomes for Youth with Varying Risk Profiles," shows that higher-risk youth benefit from mentoring in similar ways as other children.   The strongest programme benefit, and most consistent across risk groups, was a reduction in depressive symptoms—which is particularly noteworthy given that almost one in four youth reported worrisome levels of these symptoms at baseline (and that past research has linked depression to a host of other short- and long-term problems for youth).​